I enlisted the help of my favorite bio-exorcist fans: Emma from Little Gothic Horrors and Maynard from Maynard's Horror Movie Diary, to help create this segment for all the fans out there of the "Ghost with the Most!" We adore the movie for so many reasons, and since we've all done reviews of our own, we decided it was time to do something different. Something that showed our geek pride and gave you the readers lots of neat Beetlejuice things to explore.

Are you ready to share in the love of Beetlejuice? WELL IT'S SHOWTIME! 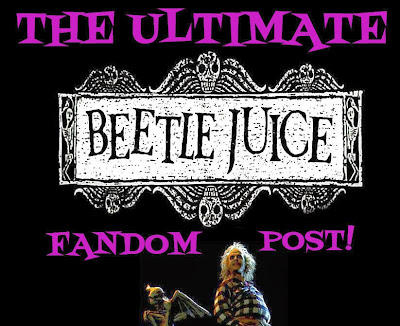 In 2008, German TV channel "RTL II" thought it wouldn't hurt to show Beetlejuice in the afternoon program – but only after cutting out everything that could scare the bejeesus out of the kids. The result: a botched and garbled censorship-disaster. 24 scenes missing, 3 minutes in total.

Wanna know what was cut out? Check the pics below. Yes, even the scene where Lydia writes about killing herself was cut... 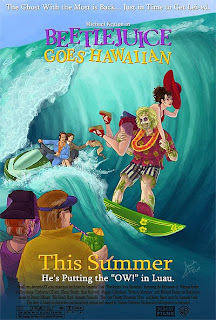 Back in 1989, Tim Burton's debut feature "Beetlejuice" was so insanely successful at the box office, the studios wanted a sequel as quick as possible. Burton wasn't that interested in doing a follow-up, but he had a few mildly funny ideas about a Beetlejuice-beach-movie, so he hired screenwriter Jonathan Gems to write a sequel, entitled "Beetlejuice goes Hawaiian".

The script got finished, Michael Keaton and Winona Ryder signed up to do the film, but only if Burton came back to the directors chair, but due to Burton's involvement in other projects and several other reasons (too many script rewrites, studios lost patience and interest), the movie gladly never came to fruition. 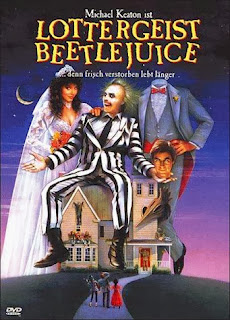 The German title of "Beetlejuice" is one of the dumbest Germanisations in history:

God damn, what a stupid title. It's hard to explain what it means, but I'll try.
Ok, "GEIST" is easy, that's "GHOST".

"LOTTER"... well, "lottern" is a dated German word that means something like "living a dissolute life". A "Lotter" is some kind of "prowler" or "tramp".

Note: these words aren't much in use nowadays, and they also weren't exactly popular in the 80s either. So, in german-speaking countries, our Bio-Exorcist is a 'prowling ghost' which makes kinda sense, but sounds stupid, at least to people who speak German. Bleh. 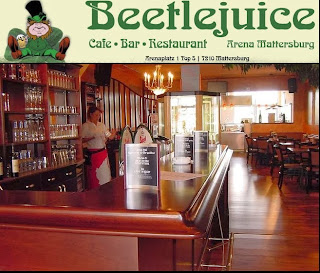 Somewhere in Burgenland , the least populous state of Austria, in a town called Mattersburg, there is a nice little pub called Beetlejuice. It's more of a traditional Irish pub and has nothing to do with the film, but according to an interview with the pub owners, they called it Beetlejuice because:

"...when you call his name three times in the movie, he appears and fulfills wishes. That's exactly how it works for our guests, they all get their wishes fulfilled." 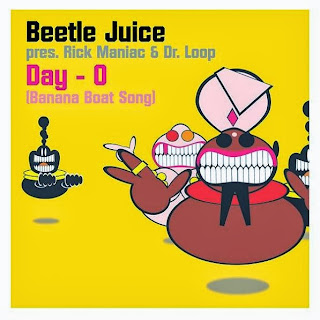 I know nothing about the two German dance-music producers Volker Grabs and Ragi Swelim but I assume that they are fans of Beetlejuice because in 2002, they released a sillydance version of Harry Belafonte's "Banana Song" under the moniker 'BEETLE JUICE pres. RICK MANIAC & DR. LOOP'.

It's a really daft version of this awesome song, but at the least the music video is fun :-) 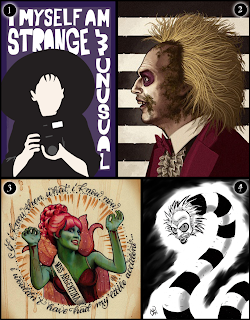 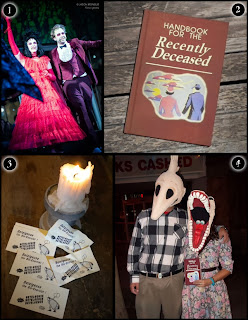 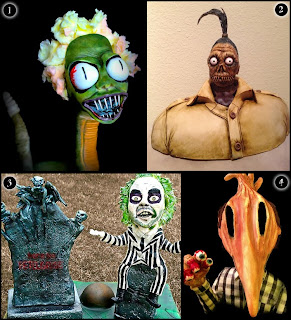 In celebration of Tim Burton's 55th birthday in 2013, 100 bakers from around the world created cakes, inspired by his films, for the "Cakenweenie" project. Here are some of the Beetlejuice entries.

Link for all the cakes: http://bakers.cakenweenie.com/100-2/ 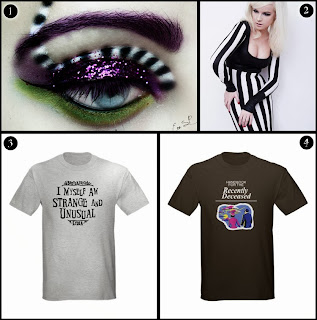 3. I Myself Am Strange and Unusual T-shirt.
http://www.cafepress.com.au/mf/66881934/beetlejuice_tshirt 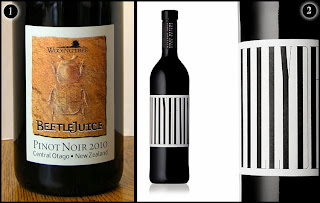 2. Tilly Devine is an Australian Shiraz and Cabernet Sauvignon made by McClaren Vale Winery. It was named after the notorious madam and bootlegger, Matilda "Tilly" Devine, who arrived in Sydney after the First World War. Her name became rhyming slang for wine and apparently she was said to be found either behind prison bars or cocktail bars, hence the bars on the label. Of course, they're totally Burtonesque as well, and I think Tilly would have been just Betelgeuse's kind of girl.
http://www.tillydevine.com.au/ 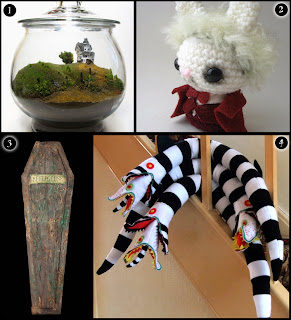 And last but not least, my contribution...I thought I'd show you all the creation I put together this month. If you've been following along with my progress (or guess from the theme of my blog) then you know I wanted to do my own version of the B-man this year for my Halloween costume. Last night I went to my first party, and showed people my bio-exorcist powers as... 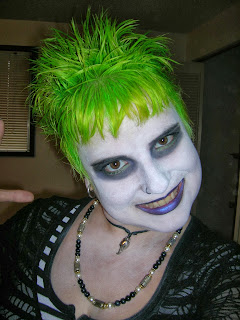 I went to a Tim Burton themed party Saturday night, and much to my surprise won the costume contest! And there was a couple dressed to the nines as Sweeney Todd and Miss Lovett too, so I had some stiff competition! (And you all know how much I adore Sweeney Todd, so I of course thought they should win!) 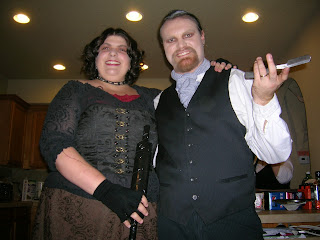 And yet the abomination of Lydia and Beetlejuice's union won... 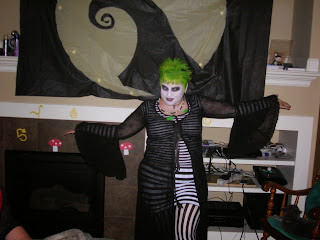 What can I say, I'm the Ghost with the most babe. *winks* Like my costume? Hell, isn't this entire post not the most amazing Beetlejuice themed thing that ever lived? I think so. I thank my fellow blogging chums for joining me in celebrating one of my favorite iconic Tim Burton movies ever. We definitely love that weirdo Beetlejuice! 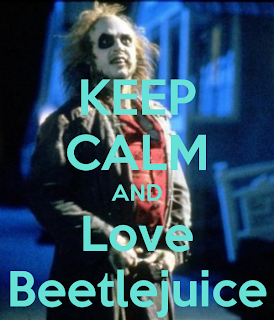