Day 11: Monster of the Week: The Vampire

Listen to them. Children of the night. What music they make.
~Dracula

Vampyre. Bloodsucker. Prince of Darkness. Nosferatu. Just a few terms the horror genre has used to describe a specific undead creature with a thrust for blood. Vampires are stuck between the land of the living and the realm of the undead. Sometimes beautiful, other times hideous. Other than the rare exceptions, vampires usually are predatory, preternatural monsters.

Why are vampires as popular as they are? It seems every so often one of the main monsters of the genre takes the center stage. Some would argue right now it's the time of the zombie. Zombies are definitely getting a lot of attention. In my last post about the Werebeast, someone brought up that maybe werewolves don't fit into today's society. I think werebeasts are due for a revival of their own. Vampires had one, and it's petering out a bit thanks to half-assed contributions to the myth by writers like Stephanie Meyer. Fuck you Stephanie Meyer for neutering a legend!

Anyhow, the reason vampires were so popular and still continue to be so is because they reflect a lot of the darkness of sexuality and the horror of surrender against ones will. When a vampire uses it's powers, it uses them to charm and seduce. Even the most fowl, ugly Nosferatu seduces it's victim, using manipulative powers to put him or her into a trance. And the fact that the favourite places to draw blood are in very vulnerable, pulse points, only adds to the sexual nature of this predator. I would argue the reason we love and fear vampires is because we love and fear sex.

There is also the life after death element that vampires make us face with their existence. Unlike zombies, vampires retain their minds for the most part. They are less human than a werewolf, and their flaws can be seen more romantically than a werewolf's. Vampires haven't always been about romance, but even in their more horrible guise they are still more graceful than any of the other monster tropes. Dracula is arguably the most popular vampire ever. But we can say that he was the first vampire to tie romance and sexuality blatantly to the vampire myth. Before him, vampires weren't as snappy dressers, didn't have love stories, and just used their seduction to eat. They didn't need to look like beautiful supermodels, and they were more about the fear of death than the fear of sex.

I like both the ugly vampire and the beautiful one, but within reason. I grew up on them. I loved that they were existential questions dressed in fine ruffles. They made me question my sexuality, my dark desires, my view of life and death. The vampire stories I grew up with were Dracula, Buffy and Anne Rice. While there were not many female vampire role models back then, their were still more powerful female victims/lovers/heroines than friggen Bella! Mina could fight back! And Buffy staked any vamp that got out of line! And Anne Rice at least had some awesome gay sexual overtones in her stuff! So did Poppy Z Brite! Because vampires DARED to touch taboo topics once! 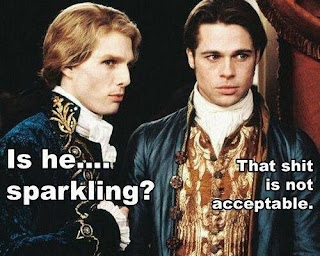 I think vampires are the prefect monster to do so. They are going through a terrible de-evolution thanks to Twlight, but I still have hope for them. There is still cold blood to be channeled from beyond the grave. I just think we need more daring writers to put more dread back into the vampire. To remind people it's an undead creature, not a pretty sparkly boy. That they KILL people, sucking their very essence through the blood. Blood is a potent symbol. It's why horror uses it all the time. It reminds us of our mortality.

Okay I'm off my soapbox now. Here's a list of my all time favorite vampires... 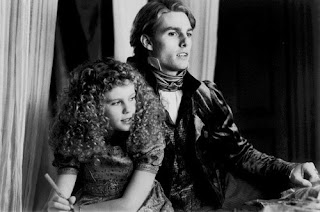 Anne Rice's Vampire Chronicles will always hold a special place in my heart. They got me through my teenage wangst (the w is for the whine in your angst) and inspired me alongside Clive Barker. Being sexually active and a touch morbid, I was drawn to books that toyed with dark ideals on sex. I doubt I am the only one in the world who has ever been turned on by a scene with a pretty vampire biting a helpless victim. I'm just not too proud to admit it. I've read almost the entire series of the Vamp Chronicles. I lost steam around Merrick. And if you must watch any movie adaptations of the books, The picture above is from the best one done so far: Interview With The Vampire. Lots of pretty vampires being naughty.

For a bit of vintage you need to get your hands on the black and white classic NOSFERATU. It's a work of art. Just look at how hideous he is. Big ears, long fangs, gnarly fingers. It's amazing. So much is conveyed in the film with little words said. The horror of this creature wrapping his arms around a beautiful woman is fabulous. To be spellbound by his powers, helpless to his pull would seem uttery repulsive to some. Part of the beauty and horror of vampires is that we are helpless to them. They make us face our helplessness in the arms of death. 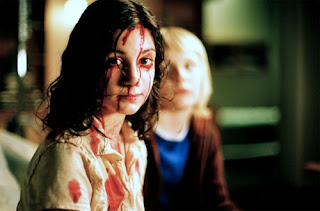 And sometimes vampires play on other parts of our human frailties. Like our need to protect the young, the innocent. Let The Right One In both in book format and in film is a must experience for any lover of the truly horrifying side of vampirism. I want my vampires to deal with mature, adult topics like perversion and murder. Does Bella deal with those kinds of issues with Edward? I can tell you right now: HELL NO. 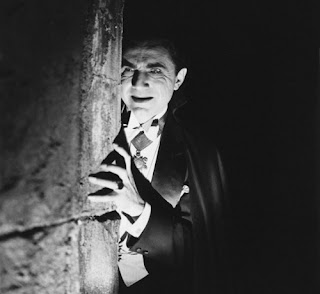 Last but not least, there is the Prince of Darkness himself, DRACULA. I love all versions of him pretty much. (with the exception of Dracula 2000. SRSLY WTF was that shit? I almost loved that Judas story but man, the rest of it fell flat) There are so many versions. From Bela Legosi to Vampire the Masquarade. If you want a concise list Wikipedia has one here. (is there anything you don't know Wikipedia?) But if I was to choose a favourite movie adaptation, I gotta say this one here is it: 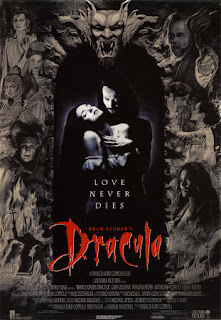 What can I say? I think Winona Ryder is a hottie, and it had Anthony Hopkins. Seriously, even in the worst movies I've seen him in, the moment he is on screen I am happy. And the effects were just fantastic.

Ah vampires, always tempting us into darkness. Are they spawns of Satan, cursed into eternal life? Or something else? Maybe they are just us working out sexual frustration.
Scribbled by Kweeny Todd at 02:53

Email ThisBlogThis!Share to TwitterShare to FacebookShare to Pinterest
Labels: Halloween Countdown, Monster of the Week