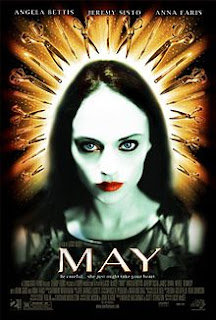 For the last day of May Monster Madness, I thought I’d do a movie that is very special to me. It’s a movie about the loss of innocence, and how we can create our own monsters. Also, I thought it would kind of fun to review a movie called May. Because May is one of my favorite Monster Mavens.

May is the story of a very sheltered girl, who happens to have a lazy eye. To her, it’s a terrible deformity, one her own mother instilled a sort of shame about. When she is younger, she cannot make friends, because her mother forces her to wear an eye patch to cover it. Since she can’t make friends, for one of her birthday’s she is given a doll companion named Suzie.

But Suzie must remain behind glass.

But there is a beautiful innocence to May, and Angela Bettis plays her with such depth you feel for the poor girl. She’s so flawed and broken and yet glorious, and when the end comes and we see her spirit crushed, we know that action is going to cause some dire consequences. This movie warns us to watch out for the quiet ones, but it also tells us that monsters can be created, and rather easily. 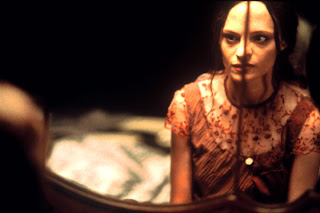 Also, if you love Mary Shelley’s Frankenstein as I do, you can see a few nods to that story in this movie. The story is unique and twisted, the cinematography is beautiful, and May makes some of the most unique outfits you’ll ever see on screen.  The movie starts with a startling gory scene, but I assure you the gore in this film serves a purpose. Lucky McKee directed this gem in 2002, and it's not fast paced, but it does move with a purposeful grace. When we reach the final, grisly end, it’s very satisfying. 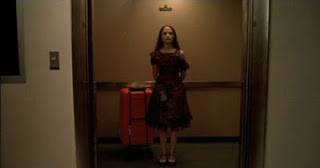 I would recommend May to all tragically broken monsters, especially those created by careless handling.
Scribbled by Kweeny Todd at 00:00 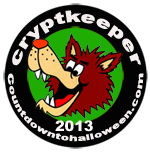