This last weekend I got the chance to go to my first film festival. And it wasn't just any film festival. I went to the  H.P. Lovecraft Film Festival and CthulhuCon!

I didn't know what to expect when I got there, and I sadly missed half the festival. They had a really cool Speakeasy event on Thursday, but since I don't live in Portland it can be hard to get up there. My friend went and said it was fabulous, and people all dressed in 1920's fashion to keep with the Lovecraft theme. However, I did get there for Saturday and Sunday, and me and my friends watched many wonderful short films. The films were mostly really good. The odd one or two needed more fleshing out but nothing I saw was outright bad. I had my favorites of course, like Cool Air, Hum, The Stomach and The Littlest Cthulhuist.

Cool Air was a wonderful retelling of the short story by H.P. Lovecraft. They went out of their way to make it really feel like the 1920's too! I was impressed with everything.

Hum was a creepy short about how sound can drive someone completely mad. Having PTSD, I have felt similarly to how the poor lady felt in the film.  I can be triggered by sound sometimes, and it feels like it is killing you from the inside out. This film was well done.

The Stomach was a really creepy concept of a medium who holds spirits in his belly, and people talk through a tube he puts in his mouth to the spirits. It doesn't end well let's just put it that way.

And The Littlest Cthulhuist was hilarious! It was a fake documentary about families who are practicing "Cthulhu Witnesses". Things get out of hand of course, because one of the teachings of the Cthulhu Witnesses is, "We don't get mad. We get even!" 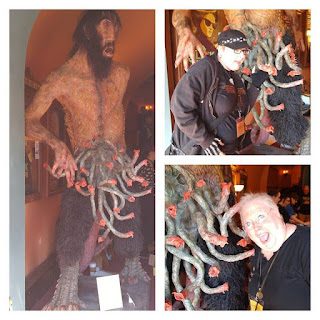 In between films I got the chance to wander around and check out the small village of booths with amazing art, all dark and inspired by monsters. I didn't have much money to buy anything, but I was impressed with a lot of the stuff I saw. 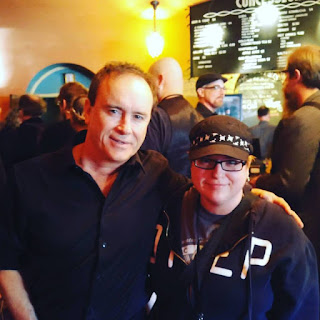 I also got the chance to hug and meet Jeffery Combs, which made my event! He is super charming and sweet. I would love to see him in more films, even if they aren't horror. We went to the viewing of Reanimator, which was the first time I have seen it on a big screen. It was great to hear people laugh at the same points I do. After the film Jeffery Combs did a great QA with the audience. He really appreciates the horror genre, but he did sound like he wished he could get more work. Acting is a hard gig, so I have nothing but respect for him. 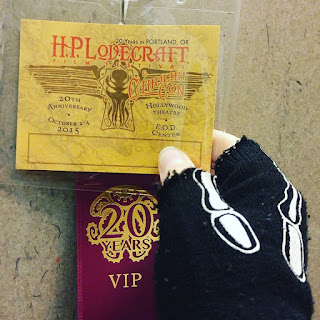 I would highly recommend the film festival, especially if you are a fan of H.P. Lovecraft. It is an amazing event, full of monsters and creeping dread! Perfect way to spend the beginning of October!

Happy Halloween month monsterkids! I will be back with more creepy goodies, so stay tuned to the blog!